Sebaceous filaments treatment and how it’s different from blackheads?

Sebum is secreted through the hair follicles to soften the skin, keep it hydrated, and limit the penetration of bacteria from the external environment. Sebaceous glands are scattered throughout the body except for the palms and soles of the feet.

What are sebaceous filaments?

Sebaceous filaments are white, opaque, bright, and almost skin-like colored filaments formed by a mixture of sebum, bacteria, accumulated dead cells around hair follicles. When viewed from outside, we can see the white sebaceous filaments situated slightly above the surface of the skin.

When squeezing these filaments, we will see this white “string cheese” slinking out of the pores. They are often confused with blackheads.

Excessive skin cleansing, which disrupts skin moisture balance, inadvertently triggers the sebaceous gland to be even more active. Then these sebaceous glands quickly return to their normal 30-day cycle. However, rest assured that your skin will not have sebum problems if it is well treated.

Differences between sebaceous filaments and blackheads

According to Dermatologist Hun Kim Thao, the difference between sebaceous filaments and blackheads lies in whether the hair follicles remain open or closed:

slightly raised above the skin surface and get oxidized. It is formed due to the accumulation of sebum, bacteria, and dead cells in hair follicles. This compound is extruded out of the skin by its natural skin cycle (28-30 days), making the pores open. Therefore, the compound after a period of time will be oxidized and turned to black or dark brown, which is dry and hard when touched on the area of ​​acne.

Blackheads can form randomly and separately on the skin while the sebaceous filaments usually form by areas (mainly in the nose, forehead, or chin).

How to treat sebaceous filaments and blackheads?

The sebaceous filament is a naturally occurring part of your skin’s system. We can only limit their appearance by scientifically treating them. If you deliberately take strong measures like sucking, squeezing, and peeling, sebaceous filaments will quickly return.

You can use toner and facial wash with balanced pH to remove excess oil without drying your skin. You can use the facial sauna, or even combined it with acne treatments to reduce oil and sebaceous filaments.

There is no treatment to completely get rid of both sebaceous filaments and blackheads. However, we can limit their appearance with a scientific skincare regime. To help get rid of them more easily, you can use natural essential oils in a facial sauna to help open the pores and extrude impurities out of the skin.

However, according to the Dermatologist Hun Kim Thao, squeezing blackheads with hands can easily cause infection, leave acne scars,s and dark pigmentations, so it is best to seek direct support from dermatologists who have experience of eliminating them properly.

You can use products with ingredients such as AHA (alpha hydroxy acid), glycolic acid, BHA (Beta hydroxy acid), and salicylic acid to reduce the amount of oil on the skin. With the ability to remove sebum, eliminate dead skin and clear the pores, these ingredients assist in the treatment of blackheads. However, these products can slightly dry out the skin. This is why you should properly moisturize your skin when using them.

In addition, home-based skincare is fairly limited in many aspects, making it not effective in skincare as well as sebum and acne reduction. Thus, dermatologists at Grace Skincare Clinic recommend that patients should have skincare; sessions directly with dermatologists 1-2 times a month.

At Grace Skincare Clinic, your skin will be clinically examined by a dermatologist who then will design a scientific skincare course tailor-made to your skin type.

In some cases, blackheads are often accompanied by under-the-skin pimples and acne inflammation. At Grace Skincare Clinic, all acne conditions including pimples, acne inflammation, and under the skin pimples are treated by our dermatologists with a treatment course designated specifically for that condition.

Most patients can feel a clear improvement within 2 weeks and are highly confident with their healthy skin after treatment. We have successfully examined and treated more than 9000 cases of pimples and acne, 98% of which saw clear alleviation after the first two weeks following the doctor’s regimen.

Do you know your skin? 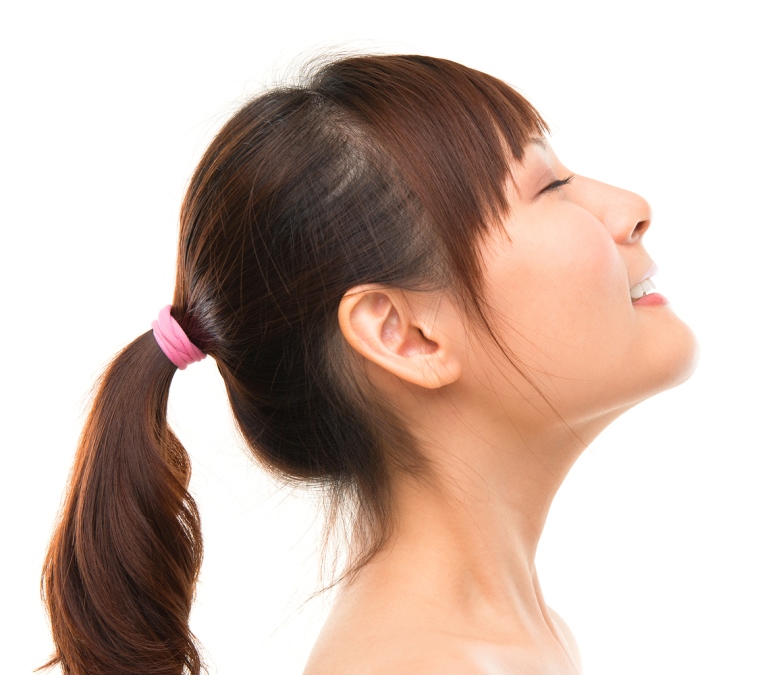 Take our quiz  & get tips and advice from our Skincare Advisory Board. 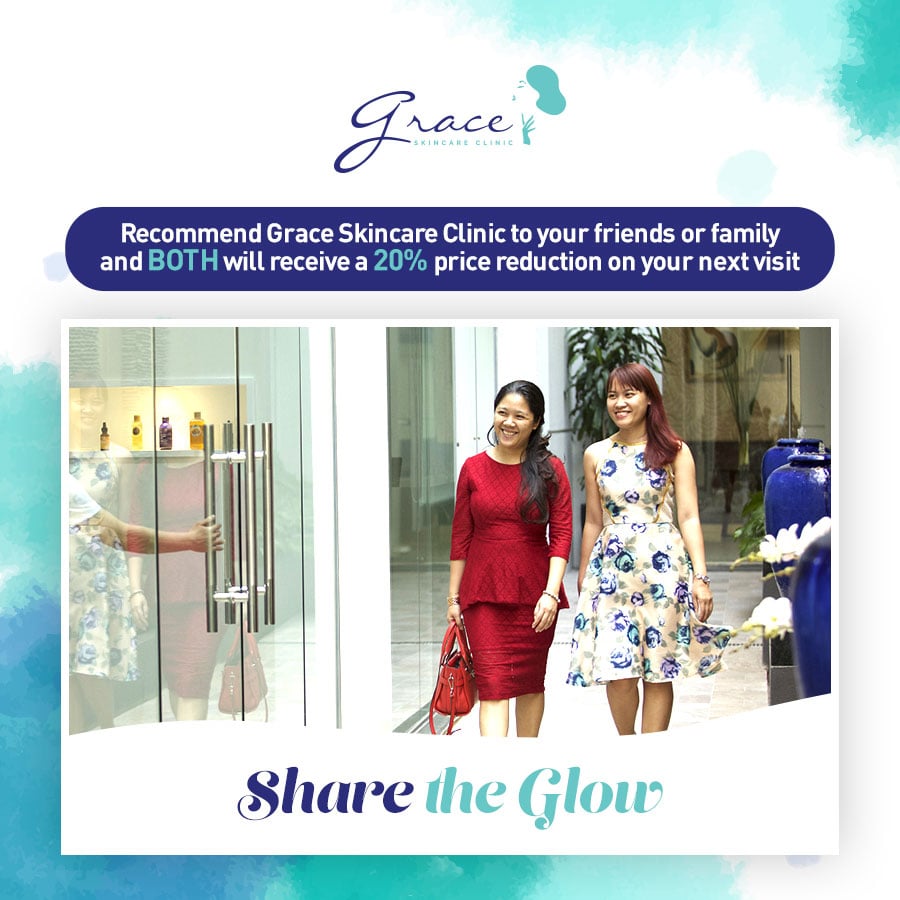 Share The Glow – a GIFT for BOTH you and your relatives

The secret to anti stretch marks from Miss Sport Vietnam

0-09-2019 "I would love to thank Dr. Hun Kim Thao and her amazing staffs for helping me through a skin improving journey over an almost year while I was staying in HCM. I received acne facial and peel every other week and the service was superb! Each procedure was well explained and Dr.Thao was very attentive. I loved her holistic way of approach to improve patient's skin. Not only she prescribed very effective acne gel but also shared great tips such as reducing the amount of simple carb intake, cutting down sugar, and most importantly highlighting the importance of getting enough sleep. She even recommended a well known doctor in town who could help me with my sleeping problem. In addition, the price was very reasonable and I was very happy with all the service I got from Grace Skin Clinic. Oh Dr. Thao even asked her staff to make me a cup of tea one day as she she thought I looked overly exhausted. I was very moved. How warm hearted she is! I will definitely recommend this place to anyone who wants to check up their skin and improve their skin. Amazing place!"

This place is amazing; they help me improve my terrible skin condition which had affected my identity, and my confidence for many years. I have been visiting Grace Clinic during summer time for the past two years, and every time I am here, they create a different program in order to fit my skin condition and my limited time. Furthermore, people from Grace Clinic always greet me with warm hearts. They once invited me to have boba tea with them which made me no longer feel like a customer but a friend which it has created a friendship overtime. I cannot stress how highly I would recommend this place. Again, they are amazing and very professional. There is one thing, you can do walk-in just fine but it would be better if you schedule the appointment so they can prepare and create the best service for you.

I absolutely love the ladies of Grace Skincare. I was staying in Saigon for 6 months and came here with acne and a congested skin from my travels. So happy I found them! Their prices are reasonable compared to other “expat” clinic that I went to. I bought the 10 facial package for a really good price and am really happy with the result of my skin after following all of their consultations. Acne has cleared up and now we’re focusing on my other skin concerns such as dark spots and hyperpigmentation. I highly recommend this clinic. They truly want you to walk out with skin you feel confident in. I’m going to miss this place and the ladies I got to connect with during my time here.   Amazing results · Expert facials · Great deals · Professional products ·Licensed skin care professional · Experienced skin care professionals

Hey guys it’s been 3 weeks since we came for our treatment. I can honestly say it’s the best I have had done.  Andrew and I look fresh without being overdone. We both had people say how refreshed we look after our holiday. Honestly they wouldn’t be saying that if they knew how much beer and yummy Vietnamese food we consumed when we were there. I can honestly say Andrew and I will be back. And I am telling all my friends how fantastic you guys are and how professional the consultation was. I have yet to find someone in Australia who is so thorough. Thank you, Kylie

I had a acne treatment here last month and now it's improved a lot. I must say that this place is very professional, modern equipment, especially the thoughtful doctor! I'm impressed!

Grace Skincare Clinic has a great and friendly service and that have a centrally located clinic. I highly recommend them!

The owners are wonderful people. I had a good experience and can sincerely and highly recommend everything about Grace Skincare Clinic!

I was so embarrassed with the scars and pigmentation marks on my face. These are from old sports injuries and harsh products on my legs from childhood accidents. I am fed up with using so much concealer makeup on my face and am never able to wear a skirt with confidence. I heard about the Grace Skincare Clinic pigmentation lightening treatment from a friend.  I took 6 treatments & used skincare product as Dr. Thao  instructed  and now my skin is beautiful and permanently clear. It was worth every penny.

as Tet is coming, I highly recommend this place for a weekend retreat, skin detoxing or even an urgent package to soothe and smooth your skin. I got back my healthy skin after just 02 week following the instruction of Dr Thao Hun and it cost me 200,000 for medical consultation fee only. Wonderful!